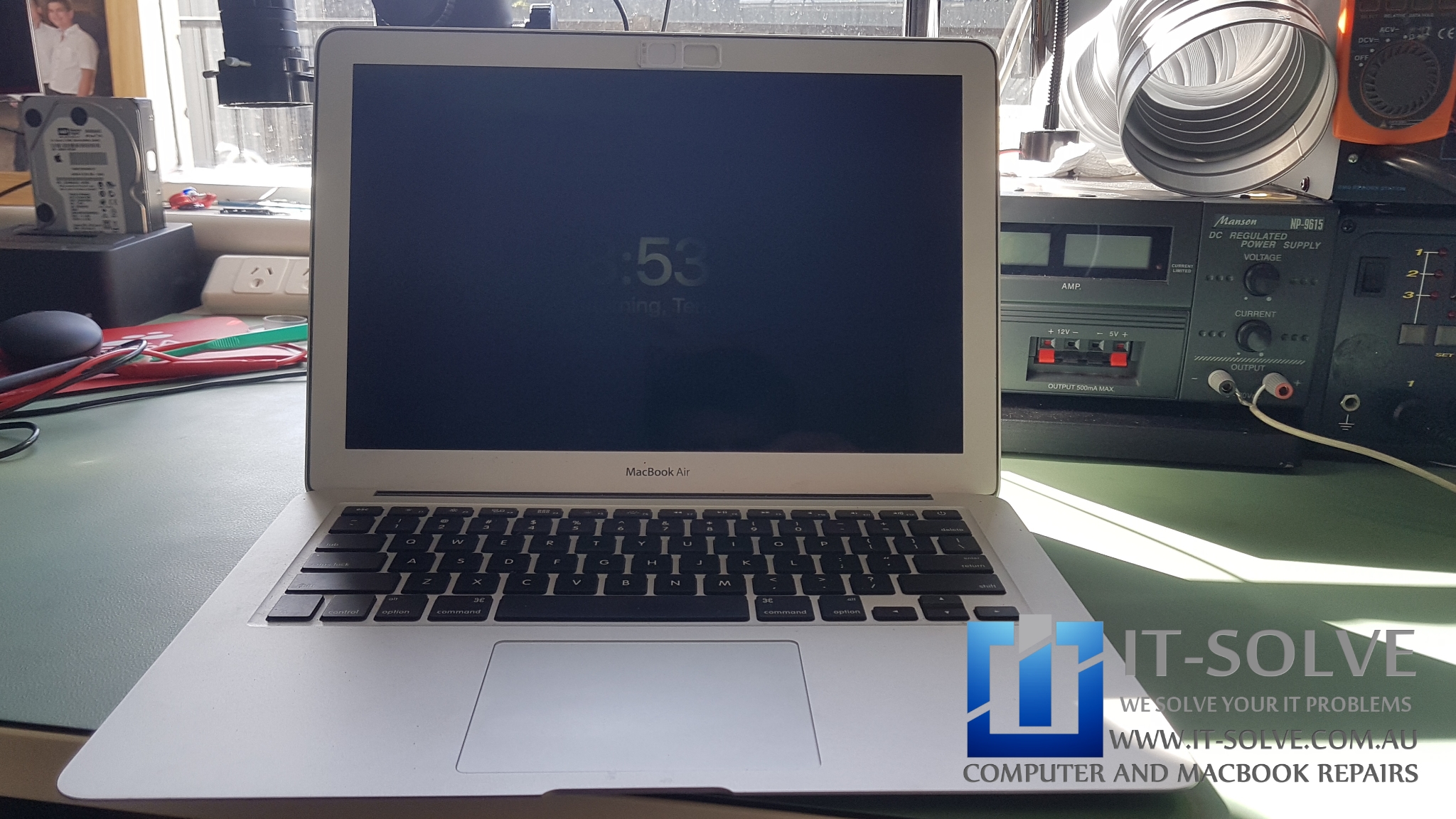 Macbook we have received this week was sent to us from interstate and had issues with its backlight. The customer called us early last week and described the issue he was facing.
By listening to customer’s explanations of the issue, we were well aware of what may have been causing it. Hence we able to give him a quote for the repair over the phone. As a result, he felt confident in our abilities and cost for the repair and sent his Macbook Air to repair here in Adelaide.

When the Macbook arrived, we could see that there was a dim picture on the screen but no backlight. So this Macbook Air needed a repair of the backlight circuit.

Check our other cases of Macbook Backlight Repairs

Apparently, there was liquid damage on this Macbook. It was intense, particularly around the screen connector and one of the voltage regulators.
We could even see how the LVDS screen connector’s power lines were burned out. So we knew this would be a challenging Macbook Air Backlight Repair.

We do stuff differently here. For example, rather than replacing the whole logic board, we measure components and identify faulty chips. And we are not scared of doing a bit more extra work to reduce the cost to the customer. Most importantly, though, reducing e-waste is our commitment to the planet.

Although, there is a fuse to protect from shorting screen connector damaging the backlight chip (little component marked with P). In this case, it seemed like the short was intense and burned the backlight chip together with the fuse itself.

We dive straight onto the repair. As it took a couple of days for the Macbook to arrive from interstate, we knew that we had to fix it asap. So the customer can have it back quickly.

We have a sophisticated equipment workshop with high accuracy microscope, ultrasonic cleaning bath, reflow machine and tools for micro soldering to achieve high-quality logic boards repairs. With hundreds of components in stock, we quickly located and replaced the faulty resistors and capacitors in the area.

After cleaning the oxidation and replacing a couple of heavily corroded capacitors, we measured the fuse – it was also blown. So we went ahead and replaced the fuse too.

We knew a big bang around the screen’s power lines, basing on the damage on the LVDS screen connector. But an unexpected short came from the display’s connector, which also showed traces of short on the power line.

This would have increased the repair cost drastically, due to now we would have the cost of a new replacement screen too. But we had a better idea, to try to repair the connector instead of replacing the screen.

We discussed this issue with the customer and offered him either to repair or replace the screen for an additional cost. He agreed to have it repaired instead. Otherwise, the new screen would have cost him $600.

Looking at the pads, apparently, heat generated in that area due to the short on the LVDS connector. This caused the isolation to melt between the pads and the bottom of the connector, which is ground.

As this metal ground was wide enough, we could modify the connector to avoid the pads shorting. We also applied some Kapton tape there to avoid any future shorts.

Once screen connector pads were repaired, we could test if the short was gone and concentrate on the remaining of the Macbook Air Backlight Repair.

Once, a major expense was avoided we continued with the rest of the issues.

Even with the repaired connector and replaced the fuse, the screen power lines were not producing enough voltage to turn on the backlight of the screen.

Macbook still had a dim picture on the screen and needed further repairs. So the next stop on the schematic was to replace the backlight chip on this Macbook Air with no backlight.

The last step was to run the logic board on an ultrasonic cleaner. This to ensure there is no more residue around other components of the logic board.

If you have a Macbook with a black or dim screen and need Macbook Air Backlight Repair, always rely on professionals.
These are expensive computers, and small mistakes may cause you a fortune. In addition, apple electronics are susceptible to ESD, and any mishandling may result in a damaged logic board.

Call us today for your Macbook Repair in Adelaide

If your Macbook or iMac is causing trouble and need a Macbook Repair Service in Adelaide, give us a call, and we will advise for the best scenario to get your device repaired.

We at IT-Solve, specialise in computer and electronics repairs. And we will do our best to quickly repair your computer without involving high costs and long waiting times in repair shops.

Messenger – Our engineers will respond quickly to your question.

If you would like to bring your computer for a repair, please book your repair here first or contact our repair team via 0469317177 |

Messenger to get booked in.

Hi, what happened to your computer? Maybe we can help.